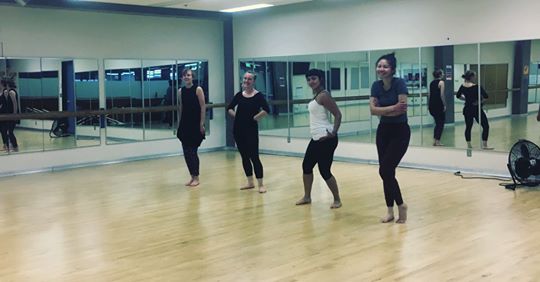 Portland Community College is the largest post-secondary institution in Oregon serving nearly 73,000 full-time and part-time students per year. But you don’t have to be a student or pursuing an academic degree to take dance classes there. Some are no credit classes, some are for credit classes (which can be audited) and all are open to the public!

The only catch, which is actually one of it’s greatest assets, is that you must sign up for the entire term. While it might deter people at first glance, committing to class one or two times per week offers something that people often crave in drop-in classes but don’t’ get, which is a progression. Sara Parker, the Dance Department Chair says “What I see happen in my classes is that while it may start out at a lower level, as the term goes on, people get stronger and ultimately end up more advanced at the end. For beginners, that progression often makes the class less intimidating, while for professionals, they know that consistency is key for advancing. I find students of all levels find it very rewarding.”

Another thing Sara points out about dance at PCC is that it really offers something for everyone. The level of students range from professionals wanting consistency in their training, to beginners who dance because, as one student puts it, “it just makes me feel like a human!” With four official campuses and multiple satellite partner locations, they serve a wide geographic area and offer classes at times that make it accessible for both the day-job types and the freelancers. And at $112 for a 1.5 hour class that meets twice a week for 10 weeks, it’s probably one of the most affordable classes in town!

Dance styles include ballet, modern, jazz, hip hop, ballroom, and Afro-Brazilian. Beyond technique classes, there is also a Dance Performance course that gives students the opportunity to perform at the end of the term. Sara describes this course as “process-based vs product-based.” She sets an original work on the people in the class, which can include any level of dancer. “Basically it includes a lot of physical exploration. investigation and discussion about process – why we are choosing to do what we are doing – and ultimately from all of those experiences the concept of the piece is born and I create a unique piece.” While out in the dance world the emphasis is often on the product (the work created), in this setting the emphasis is on the process of creating. “Some of my students take this course specifically to get more performance experience, while others have said they simply do it for what they learn about themselves along the way, with no intention of advancing as a performed. Either way, working in this style is a rare luxury and can be very inspiring.”

This monthly email is for COMPANY Members only. It includes funding opportunities, calls-for-artists, professional development, and invitations to Dance Wire events. You will also have access to the archives on your Member Dashboard.

We have improved an existing member benefit. You used to have to wait for the newsletter to learn about professional development events and funding deadlines, now you can see opportunities right here as they become available! This list includes training events in topics like taxes, social media marketing, and grantwriting. You will also find grant opportunities and deadlines which we've marked to indicate if individuals and fiscally sponsored projects are eligible.

Dance Wire is proud to be one of the Community Partners that brought SpaceFinder to Portland! Finding space for rehearsals, performances, or events has never been easier. You can also list your space by creating an account straight from their website. Membership not required. SpaceFinder is hosted by Fractured Atlas.